We are living in complex and dynamic times. Money and asset managers have to do quite some heavy lifting to stay up-to-date. This is why we created the Schlossberg&Co Monetary Graph. It is a navigation tool helping to profoundly understand the world of money and investing. 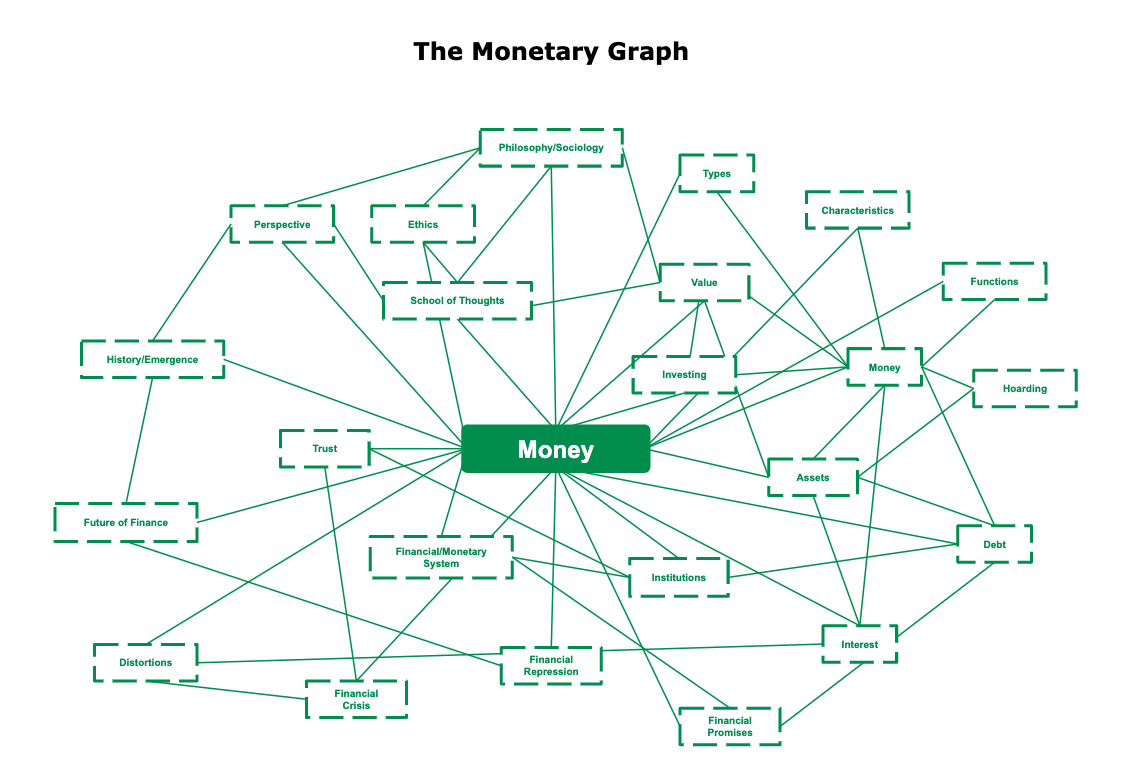 Money is omnipresent today and it is impossible to imagine life without it. Hardly anyone in today's society does not come into contact with it - either it is earned, spent, held, invested, stolen or even created.

These days, it is created in unlimited quantities. With the continuous collapse of the markets since the end of February, central banks around the world have burst open the floodgates. A crisis that seems to have been triggered by a virus is fought with ever cheaper, worthless money. After all, what does it mean when unlimited amounts of money are created? Confusion seems perfect.

As if this confusion were not enough, money has always suffered from a paradoxical dilemma: As a pure means (to an end), money is disreputable to too many people; as a pure end, however, it is idolatrous to too many people; it is the filthy lucre. So obviously, money is taking a lot of flack.

Following Johann Wolfgang von Goethe’s original quotation, it can be stated: "Money is the things they seek, all, alas for us, the poor people!" The relationship that we humans have towards money is ultimately an ambiguous one. We are indispensably dependent on it, since we notice the relevance of money at the latest when there is none left. But even Goethe recognized or suspected that money is not only a curse to our existence but also a blessing of our modern civilization. Without money, mankind would never be where it is at today. From a materialistic-utilitarian point of view, money truly is a real gain.

Because of its universal character and its significance for apparently all areas of life, the topic of money is a field where almost all ideologies clash. While money is demonized by some, it is glorified by others. Although today’s various ideological views of money always scratch at the truth in one key point, they nevertheless perceive only a glimpse of the whole picture.

As the great Austrian economist Carl Menger noted, money is a social phenomenon, which makes it incredibly complex. The subject of money is a topic protypical of social sciences, in that it exceptionally well illustrates the difficulties of the social sciences. As a social phenomenon money is about the interaction of people, which manifests an interesting complexity. Human action is never isolated and is always a consequence of and a reaction to the actions of other people. This results in phenomena of first, second, third and n-th order.

In addition to the complexity, money is riddled with contradictions, since the actions of humans are in itself full of contradictions. Consequently, monetary theory and thus the phenomenon of money is one of the most contradictory and complex issues in all of the social sciences. Just the question of what money is can hardly be answered with certainty. Too many ideologies, associations, and wishful thinking merge in an attempt of giving a possible answer to this question. This makes it all the more difficult to understand money if nobody knows what the heck we are talking about in the first place.

In order not to be completely in the dark, a holistic view of the topic is indispensable. Only those who face the inevitably existing contradictions head on are able to analyze and interpret them in a fertile way. A holistic approach primarily involves theory. It is the highest form of practice and is the only way to look at the real (theoría in its original meaning). Pure theory without practice, however, is empty, floats in a vacuum and develops past reality too quickly. A combination of theory and practice is inevitable and should be complemented by studying the past. History will help classify the dynamics of the present in order to deduce possible future tendencies more accurately.

This is the approach we at Schlossberg&Co choose. We study the phenomenon of money on a solid, theoretical and holistic basis. The starting point for us, but also for our members and interested parties, is Schlossberg&Co’s Monetary Graph. While the first slide places money as a social phenomenon in a broad context, the individual topic slides allow for a deeper look into individual subject matters.

The Monetary Graph is designed to help us better understand the phenomenon of money, its interaction with the real world and ultimately its developments and consequences for our own assets. Especially in turbulent times like ours, a profound analysis is essential, since it is all about protecting one's own money, assets and ultimately one's own person and family.

Customers, interested parties and curious people should not be left alone though. Schlossberg&Co will be presenting understandable breakdowns of the complexity of the Monetary Graph in numerous events, lectures, and webinars. These will not just be boring financial courses that are out of touch with reality but will be insightful, interactive gatherings designed to organically promote a movement, the Money Movement. By interacting with members and potential new members and exploring the phenomenon of money, we translate theoretical and practical insights into a future-oriented investment strategy that will help you to survive even the most difficult times.