What Bitcoin is, can hardly be answered. However, it can be safely said: Bitcoin is the 21st century's most pervasive meta idea, that is unfolding rapidly in numerous manifestations. 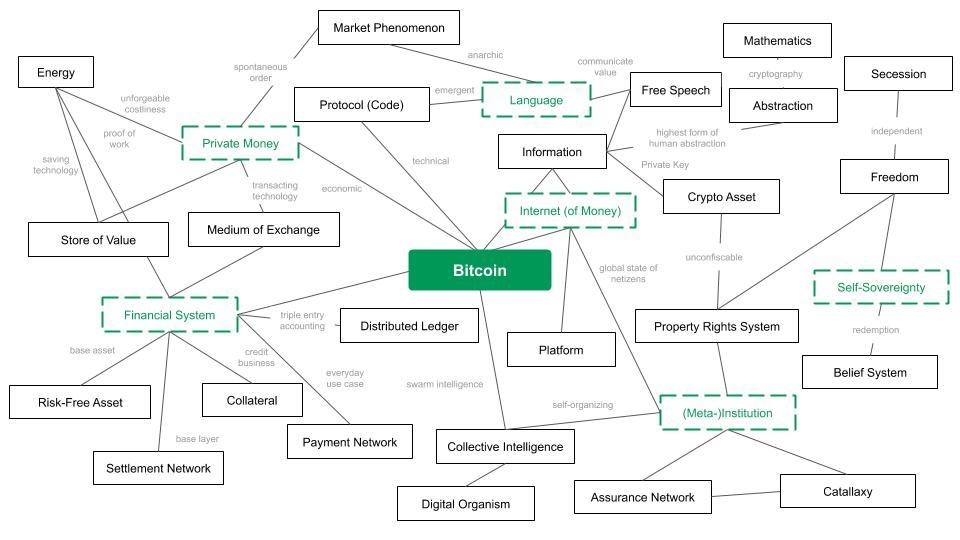 It just ticks, no matter what. It’s the only decentralized clock on our planet. And it runs on time. Even after more than ten years, Bitcoin creates a new block of transactions approximately every ten minutes, and thus behaves exactly as Satoshi Nakamoto envisioned it. Something as self-evident as time suddenly becomes a problem in a decentralized network. It’s not easy to ensure a chronological sequence of transactions without referring to an absolute time set by the outside world. With the implementation of proof of work, the anonymous inventor of Bitcoin, Satoshi Nakamoto, solved this problem by creating a probabilistic decentralized clock. It may be inaccurate compared to atomic clocks, but it clearly determines the order of the network’s transactions. Thus the blockchain becomes the source of truth, a timechain with only one valid transaction history.

Bitcoin, or more precisely its block- or timechain, is, therefore, a decentralized clock. This may confuse many, who have been reading about Bitcoin in the context of cryptocurrencies. In comparison to a currency, a clock seems a bit far-fetched - doesn't it? So what exactly is Bitcoin?

Ten years into the Bitcoin experiment, there seems to be no definitive answer. It's likely there will never be a definite answer because Bitcoin is simply different things to different people. It's like the metaphorical elephant, of which each and every person has a personal experience and imagination. Over the last few years, there have been many debates and arguments (block size) - and many will still follow (anonymity or network security aka inflation).

We at Schlossberg&Co don't want to commit to a definite image of Bitcoin, but rather lay out the immensely broad spectrum of different perceptions surrounding Bitcoin. Technically, Bitcoin is a protocol like other (Internet) protocols. BTC/LN is like TCP/IP. As a protocol, Bitcoin is programmable code. And code itself is actually a language - which is why Bitcoin is seen as a language. It is a language to communicate value and because of its digital and global character, it is a universal language. Whoever uses Bitcoin, is articulating themselves according to the language rules, which are defined by the protocol in the form of code. Ultimately Bitcoin embodies the right to freedom of expression. Consequently, the ownership of Bitcoin cannot be legally prohibited, since any institution that sees itself as a constitutional state has no real legal basis to prevent people from holding ones and zeros on a device in their pockets.

Bitcoin's comparison with the language highlights one major fact: Like the language itself, Bitcoin is also an emergent market phenomenon. Still in the process of being created by a social process, Bitcoin has emerged from a multitude of human actions. In the manner of a discovery process not planned by a hierarchical-centralist hand, Bitcoin advances as a quasi-market anarchist phenomenon and seems to make constant progress due to reliance on its inherent principle of trial and error.

Probably the most significant manifestation of this market emergence is Bitcoin's idea of being an instantiation of private money. There are many examples throughout human history of money that has evolved out of a process of social discovery, with gold and, to a lesser extent, silver being the most prominent ones. In this sense, Bitcoin is not only a technologically interesting matter, as many believe, but also an unparalleled monetary event.

The discussion about Bitcoin as money has resurfaced the fact that money is not just money. Especially between the concept of a store of value and that of a means of payment, there are eagerly fought controversies: Some see Bitcoin as a clear manifestation of digital gold, while others see it as a medium of exchange. The latter therefore concentrate mainly on the development of the Lightning-Network, which is supposed to boost Bitcoin's transaction capacity, so that even microtransactions become a reality. On the side of store-of-value advocates, the camps are also somewhat divided: For example, one group is convinced that Bitcoin must first establish itself as a store of value asset, whereupon it will grow into the means of payment function just naturally - probably via Lightning. Other within this camp are more skeptical and see an inherent trade-off between a stable store of value and a widely accepted medium of exchange, since for something to be a good store of value it needs to be scarce, while a medium of exchange needs to be flexible enough to serve as a lubricate for a transaction economy.

There is no question about it: Bitcoin is a non-corporeal but still tangible asset. As such it could power its entire financial system. So Bitcoin is seen as a financial infrastructure that will one day mimic the traditional world of finance. Within this system, the Bitcoin mainchain, i.e. the base layer blockchain, represents a settlement network as provided by central banks today. Mainchain bitcoin are seen as the risk-free asset and form the foundation of this new financial system, just as US government securities serve as the foundation of the conventional financial order. Already today, Bitcoin is used as collateral for borrowing and lending endeavors fueling credit markets. In the course of further developing financial instruments based on bitcoin, including derivative products for smoothing price volatility, its use as collateral will continue to grow.

A financial system certainly includes a payment system and thus Bitcoin is seen as a payment network. None other than Satoshi Nakamoto himself introduced Bitcoin as an electronic peer-to-peer cash system in his white paper. Whether it will be the Lighting network or even a higher level protocol within the modular Bitcoin stack that will turn Bitcoin also into a fully-fledged payment system is not entirely clear yet. Bitcoin's sidechain Liquid could also play a decisive role in this respect. As a functioning sidechain, it is interesting for crypto exchanges to mutually process international payment flows - not unlike the SWIFT system, which currently processes payment flows handling the secure messaging and payment transactions of affiliated companies and institutions in the traditional world.

Bitcoin becomes a platform for users due to its numerous features and the different areas it touches. Bitcoin itself is the latest iteration of a platform economy that works in a way that stimulates more and more people to use the platform. It is the famous network effects which, the longer Bitcoin exists - and this is to be expected according to the Lindy effect - are likely to have an increasingly strong pull effect. After all, everyone has access to Bitcoin. Bitcoin is an open, neutral, cross-border, permissionless, censorship- and seizure-resistant network. Not one or more nations control it, but it lives on the Internet - Bitcoin is the Internet of money.

The Internet has made it to almost every corner of the earth and it will continue to grow over the next few years. Bitcoin as well is already everywhere and yet nowhere. Basically, Bitcoin is just information. And what is information? So much we know: one of the most fundamental things of mankind. Bitcoin is therefore ultimately an abstraction, but not just any abstraction, but probably the highest abstraction that has been invented by humans so far. Bitcoin is entirely based on mathematics. Bitcoin is virtual, but it has overcome the problems generally associated with the digital realm. Thus it is not physical or material, but concrete and tangible. Bitcoin was the first thing ever to digitize scarcity that is normally inherent to the real world. Bitcoin is therefore digitally scarce. Not only that; by its very nature it is also a so-called (digital) bearer instrument. It contradicts the usual notion of a digital good in this respect too. As a bearer instrument Bitcoin can be held independently apart from any third party.

So Bitcoin is a cryptoasset that can be controlled using cryptographic methods. In turn, cryptographic controllability means that the owner of a cryptoasset can dispose of it by means of an electronic signature. Bitcoin's innovation, however, is that an electronic signature is not used to prove your name or who you are, but that you own something - which is unforgeable Bitcoin.

And who do you prove that to? All of the full nodes in the Bitcoin network verifying the transactions. And how do you prove it? Via the respective private key, which is necessary for decryption. And what do you prove? That enough UTXOs, i.e. outgoing transactions, reference a certain Bitcoin address and that these have not yet been used as input for another transaction. This information is stored in a distributed ledger. Bitcoin is the world's first globally distributed ledger that records ownership relationships unmistakably and unalterably at any moment. This also makes Bitcoin into a property rights system, property rights that are not tied to a state's monopoly using force to back them. Individuals can own property in the form of a cryptoasset that is not dependent on enforcement and protection by territorial sovereignty.

This is why Bitcoin also stands for self-sovereignty empowering the individual. Because Bitcoin strengthens the individual, there are great incentives for individuals to work towards the fruition of the new Bitcoin institution. As such, Bitcoin is a catallaxy and thus the result of countless individuals. A public blockchain like Bitcoin has a rule structure, an asset for transferring and storing value, a platform for contracts, services, sub-organizations, and a system for control, governance, and security.

Bitcoin embodies and enables the rise of the self-sovereign individual. It was the philosopher Ayn Rand that said the individual is the smallest minority on earth. As such, it is given a hard time in our world - especially in our times - which is why Bitcoin keeps on drawing attention as a symbolic force for freedom. It is an attempt to free oneself from old encrusted (financial) structures and fictions that are considered infallible. In this sense, some consider Bitcoin to be the redemption and Satoshi the Redeemer. For them, Bitcoin is a belief system for which it is worth fighting the metaphysical struggle against that other religion whose God is the centrally organized fiat currency.

Just at the end of this article, the decentralized clock "Bitcoin" ticked once again, creating another block with valid transactions in it. Bitcoin is ticking and ticking because Bitcoin simply is. It is Ralph Merkle who described Bitcoin as a new lifeform. In its essence, Bitcoin is clearly definable and therefore unambiguous. As a digital organism, however, Bitcoin's nature is infinitely complex and, due to its self-organizing collective intelligence, will probably never be conclusively categorized and defined.

Of course, the list of what Bitcoin is could be continued at will, which is why we end the seemingly infinite continuation of it at this point. After all, Bitcoin itself is finite - remember it's absolute digital scarcity.